In Farmland We Trust

In Farmland We Trust

COVID and its knock-on effects have impacted some market segments more than others. Some sectors, like technology, have generally benefited as more consumers and businesses switched toward online platforms.

Other sectors like REITs remain below pre-COVID levels. Most REITs are struggling with lower-than-normal rental income, rising operating costs and are now facing rising mortgage rates.

However, Farmland Partners (FPI) have soared in value, doubling since last year. Since March 2020, when the REIT was trading below $6, it is now trading at $13 and has risen in a nearly vertical direction since November of last year. 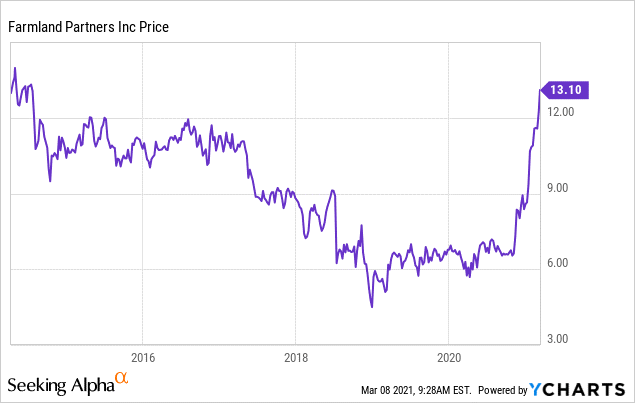 The core reason for our bullish view on FPI last year was its abysmally low valuation and the fact that demand for food would likely not be impacted by COVID. Thus, it was among the few genuinely COVID-resilient REITs.

FPI has a strong correlation to the agriculture commodity price index: 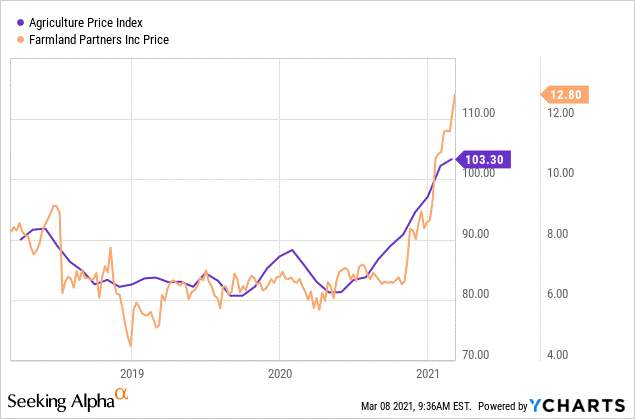 Investors should take note of agriculture prices since it is driving food inflation higher around the world. Importantly, agriculture commodities were in a bear market for about a decade following the 2008-2012 bubble burst, so food was actually more expensive a decade ago. That said, this now appears to be a very strong bull market.

Agricultural commodity prices are rising for many reasons. This includes supply-chain issues from COVID regulations which have led to a decline in production. Additional factors include drought and locusts in Africa, swine fever in China's pigs, and rising energy/oil costs. While some of these factors may decline, there are so many bullish catalysts that it seems reasonable to assume the rally may extend above 2012 levels.

Wealthy individuals have taken note of this situation.

Bill Gates has been aggressively acquiring land in more than a dozen states, recently making him the top landowner in the United States. Other billionaires such as Jeff Bezos (and a long list of other billionaires), including Ted Turner, founder of CNN, have also been in the land acquisition business.

The reasons billionaires have been buying farmland are not precisely clear, but a significant reason may be simply because farmland is a tax-efficient and generally safe investment. This is particularly true considering the rise in agricultural commodity prices.

Farmland Partners is attractive because it gives investors the ability to invest alongside these billionaires without the difficulties of acquiring land.

Overall, Farmland Partners is trading at its fair value. If it rises above $14, then it would theoretically be overvalued. However, we are now living in entirely uncharted times of monetary experimentation, and it's anyone's guess where farmland prices are going other than an instinctive sense of upwards.

FPI is among the few REITs which do not carry immense COVID/economic risks. It is also entirely possible that the many billionaires purchasing farmland property know something we don't that could cause farmland values to rise further. This does create some attraction to FPI for long-term buy-and-hold investors.

Tesla, led by Elon Musk this past week, would seem to have timed its commitment of $1.5 billion to BTC from its treasury perfectly. Just as

Predicting the future is a risky and often thankless task, especially in these times of fear, fake news, divided electorates, and rising ge

KODK.N, originally once world esteemed 'Eastman Kodak' of film and camera fame, sprang to spectacular life this past week rising near verti

A Vaccine for Recession

As economies enter into recession and with some forecasting a depression, businesses are hoping that a potential vaccine will get us back t

As the days and weeks slowly pass, boredom and anxieties rise together with the summer heat as more and more people begin to question the r